I have been a bad blogger these past few weeks.  I apologize.  I have my kids home and my husband around, and I just want to spend my time with them most days.

However, I am still solar cooking!  Most things are oldies but goodies, but I should share how they are working out.

Chili – yet -just as good this time as it was the first day I solar cooked.  I can’t recommend this recipe enough!

Cupcakes – I made the Bob’s Redmill Vanilla Cake ones this time, and they turned out better then the chocolate ones.  I make them as cupcakes so that they will fit into the oven.  I have to put a black towel over the muffin tin so that they will cook, and I’m having trouble with the towel getting into the batter.  I may need to try toothpicks to alleviate this problem.

Rice – I bombed this.  I have been cooking later in the afternoon as the sun is staying up longer and I have been able to cook after 3:00.  However, the cooker just didn’t boil the water, so I had to regroup for this.  Next time I’ll cook it earlier!

And then we went on vacation again (a bit a fiasco for another time) and once again the solar oven wouldn’t fit in the car.

The cooker itself is holding up well, though it is getting a bit dirty inside.  I may need to try cleaning it again.  Hopefully I will remember not to use vinegar, as the last time I ended up with vinegar tasting food!  Yuck!

It’s been a little over two months now since I started solar cooking daily, and I wanted to take a moment to share what I have learned.

1. Have food in the freezer.  I know I mentioned this last time, but I can’t stress it enough.  Unless you want to eat take out every time it is overcast, it is probably prudent to have almost a week’s worth of leftovers ready to defrost.  Actually, that’s what I cooked today.  I had some leftover beans in the refrigerator, so I made chili to freeze.  (For a great chili recipe, see here.) My stock was pretty much completely depleted last week when it was cloudy so often.

2.  Preheating helps.  I tried baking the first several times by just putting the food in and pointing the oven at the sun.  While I did manage baked food, I have found that it is tastier and less dry if you preheat the oven first, then put your food in, much the same way you would cook in a conventional oven.  Muffins are much better when they don’t crumble the moment you touch them. (Yummy muffin recipe!)

3.  Consider eating  your big meal at lunch.  I keep toying with this idea, and it hasn’t quite worked out for us yet, but the latest I can cook in the afternoon is about 3:30 right now.  That’s too early for dinner, even for my toddler.  What would make the most sense is to cook a big meal for lunch, and have sandwiches and leftovers at a more normal dinner time.  I’ll let you know if we actually succeed at this.

4.  Shine up your oven.  The outer reflectors get pretty grimy and need cleaned up like the inside.  It’s not a constant thing, but worth doing once in awhile.

Let me know if I missed any important tips!  Happy Solar Cooking!

We did it! We started solar cooking! Yesterday morning was our first (and hopefully not final) attempt at cooking in our solar oven.  If you are new here, we have a box-style solar oven called a Sun Oven.

So, yesterday morning I hauled the box out back to my south-facing porch and opened it up. It’s pretty easy to unfold the reflectors and since this was my first attempt, I didn’t worry too much about where the sun was pointed. I just angled it to face a little bit east of due south, and plopped in my sturdy cast iron cooking pot with lid.  Apparently the lid is important in this type of cooking as otherwise the heat doesn’t stay in well.

I used one of my favorite slow cooker recipes to try out the cooker. It’s vegan, so I figured if it didn’t work that there would be less of a chance of us all getting food poisoning. I believe it is my own modification of a recipe from the book Thrive by Brendan Brazier.  Here’s my version:

2 bell peppers, chopped (I like red and green, but any work)

Dump it all in and cook all day.

That’s literally what we did. I put the chili in around 7:30, my son’s preschool came over to guack at it around 9:30 am, and by then the temperature inside the oven was reading about 150 degrees F! I checked on it every few hours to see how hot it got, and it peaked at almost 300 degrees at noon (not bad since the high was only 80 yesterday outside). An hour later I found the steamiest glass cover ever. The water was beading and running down it. I had to research online if that was okay or not, but apparently this is normal with stews and such, so I just opened the glass for a second to read the temperature and then put it back. It was still reading 250, so I figured it was fine and left it till dinner around 5 pm. 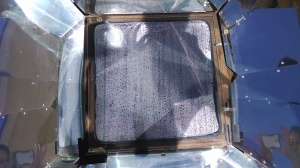 Rating: Success!  With the exception of the cast iron flavor from the pot, the chili was hot and delicious! Let’s hope this is the first of many successes – someone pass the wine 🙂 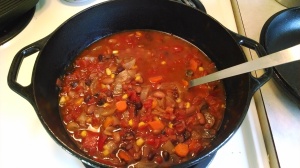